4 Month Check Up and First Food! 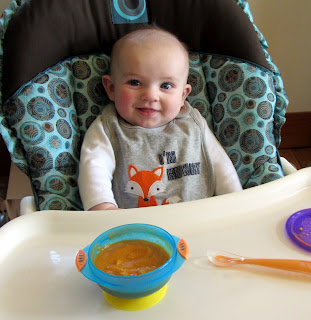 It has been an eventful weekend for Mr. Noah. On Friday, we went to see the Dr. for his 4 month check up. Noah measured in at 16lbs 13 ounces and 26 inches! He jumped back up in the 80th percentile for weight and height. I knew he was getting heavy because the infant car seat was REALLY heavy.

The Dr. also said that if we wanted, we could start experimenting with purees. The new recommendation is no cereal or grains until 6 months but the Dr. said that if we wanted to start with fruit or veggie purees it would be ok. Of course, starting now with purees is not meant to replace nursing or even give him any nutrition or calories but only to expose him to new tastes and textures.

I have been thinking about making my own baby food for a while and wasn't really sure if it would be a good idea. It seemed like a lot of work. After reading more about it and talking to some friends, I decided to give it a try. I figured, it would save money and space that all those baby food jars take up and would be a special way to provide for Noah. I am sure jarred baby food is just fine but I thought this would be fun to try.

I did some research and decided I wanted to Beaba Babycook but it was pretty expensive at $120. Good thing I found one of Craigslist for $50!  So after picking it up yesterday, we chopped up a sweet potato, steamed it right int he Babycook, then used the Babycook to puree it as well. I mixed in breast milk to thin it out since it was very thick. I was able to put a fair amount into a bowl and also freeze 12 cubes of about 1 oz each for future use. It was really easy! It only took about 20 minutes total and now we have enough sweet potato to last a while since Noah won't eat large servings for a while. 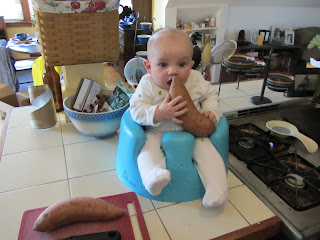 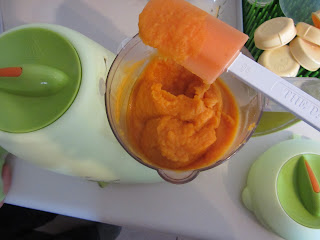 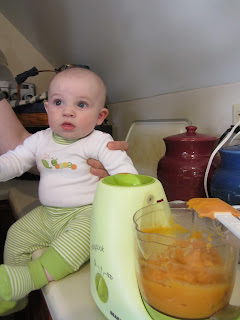 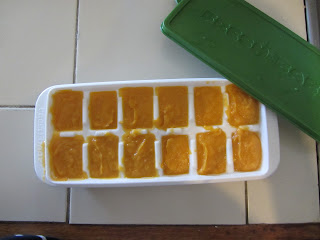 We set Noah up in the high chair and gave the puree a try. He was.... less than impressed. But he made some really funny faces and it was only our first try. It can take up to 20 tries for a baby to like a food. I don't think he disliked it by any means, just thought it was weird maybe. 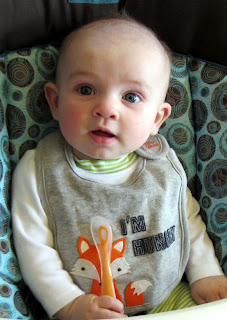 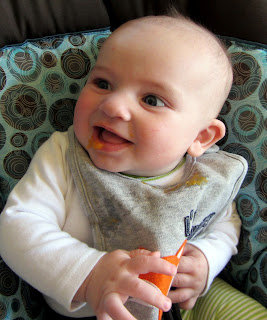 Posted by Shannon at 8:12 AM No comments: 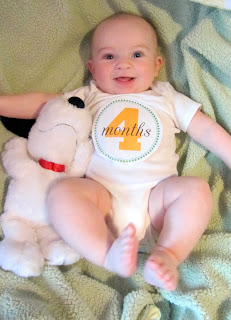 Today Noah is 4 months old! That is in.san.ity. I feel like I am repeating myself but it is weird in two completely opposite ways. On the one hand, I can't believe it is going by so fast and he is growing and changing so much. On the other hand, I can barely remember life without him. I love him more everyday and just when I thought I couldn't possibly love him more, I hear him laugh in his sleep on the monitor and like the Grinch, my heart grows three sizes in an instant.

Best thing I have ever done.

Here are some outtakes from Noah's photoshoot. He is getting squirmy! 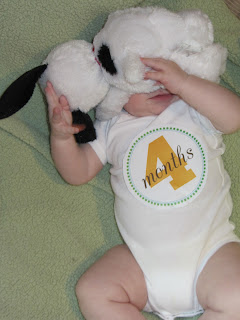 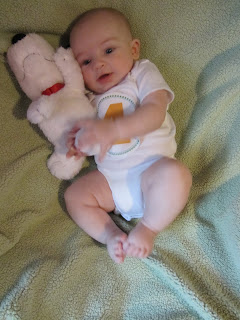 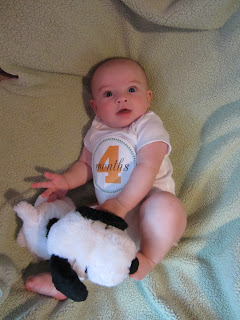 Posted by Shannon at 8:57 PM No comments:

Noah had his first Easter! He didn't really know it though. He wore a super cute outfit that his Nanny gave him, complete with bunny ear hat and cotton bunny tail butt. Here are some great pics from Noah's first Easter.

Noah is going on 1 full month of day care soon! He is doing so great there and Mommy is feeling much better about it too. Noah goes to school (that's what we tell him) at the local YMCA that is only 5 minutes from my office. I have been able to pop in at lunch to nurse him and to see his smiles half way through my day at least 3 times a week which has been really helpful. It has also been great because I have really gotten to know the teachers and all the other children in his area.

At first he was having a hard time napping and eating enough. There are just too many new things happening! Now he is getting better and better each day, taking more naps and eating larger amounts from his bottle more consistently. With his teachers he practices tummy time everyday and is becoming more tolerant of being on his belly, getting closer and closer to his first roll over. We are hoping it will come soon! He also plays in a rocker and an exer-saucer as well as on an activity mat. He has lots of friends there but is the youngest baby at the center so he gets lots of snuggles and attention from all the teachers which he loves. I know that even tough it is hard to be away from him each day, he is learning how to be social and will have so many great skills from his experiences in the end.

We have been doing bath time in Noah's whale tub for a little while now but just a couple of days ago, he discovered splashing. Now he doesn't just like bath time, he LOVES bath time. as soon as he gets adjusted to the water he splashes around, smacking the water until it hits his face. When he splashes himself, he licks the water off of his mouth and makes a confused face. New things to taste other than Mommy's milk and his fist!!


Noah also has been spending a lot of time in his Fisher Price Rainforest Jumperoo. He LOVES it. He gets to "stand" and bounce around, 2 of his favorite things. he isn't quite tall enough for it so we put a pile of books under his little legs so he can jump around!

Now that the weather is getting warmer and warmer, Noah is loving the outdoors. He goes on lots of walks and looks super cool in his baby sunglasses. Gotta keep those baby blues shielded from the sun!
He even got to go on the T last weekend for the first time! It was very exciting for him.

Posted by Shannon at 8:21 PM No comments: 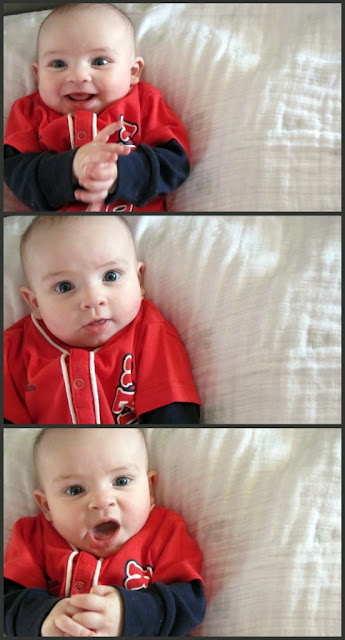 Posted by Shannon at 9:44 AM No comments:

Email ThisBlogThis!Share to TwitterShare to FacebookShare to Pinterest
Labels: photos

On April 5, 2011 our lives changed when the Dr. called and told me that we were having a baby. I was stunned. You would think that after going through ferility treatments that it would be somewhat expected but I was surprised.

After going through a second round of the hormonal medication Clomid and an Ovidrel injection to try to overcome my PCOS I waited and waited to find out the results. Then I broke the cardinal rule of the fertility clinic, I tested myself at home. I had an appointment for a blood test on a Tuesday morning but decided to take a home test on the Sunday before. It came back negative and I was crushed. I drown my sorrows in a large plate of pasta that night and became angry and depressed. Why wasn't it working? When, if ever, would it work?

When Tuesday morning came along I was in no mood to go to the clinic at 7 AM for a blood test that I was sure would be negative. I went and wrote a bunch of questions on my call back card. When will we try a higher dose? For how long do we try this protocol before moving on to something stronger? What is next? I went to work heavy hearted, dreading the phone call that was to come later.

When the call came, I was in my office. Here we go, I thought. I probably did not sound very nice as the nurse greeted me but I think it would be understandable. She started to tell me results. "Well I would be happy to answer your questions but really they don't matter because you are pregnant!" WHAT? I must have asked her if she was sure abut a dozen times. I really couldn't have been more surprised.

I went outside to call Jake and he was dumbfounded. On my way home I bought 2 boxes of pregnancy tests, the good expensive digital kind and took one as soon as i walked in the door. PREGNANT. And so started the best year of my life so far...

Lesson learned- never cheap out on a pregnancy test. The negative one was a generic brand and probably wasn't equipped  for early testing. Pregnancy testing is not a place for savings!