What a Difference a Year Makes

A year ago, a new life was created. A new life that we didn't yet know about. Only a year later it looks like this: 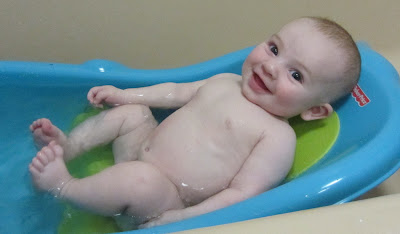 I don't mean to sound cheesy but life really is some kind of miracle.
Posted by Shannon at 6:29 PM 1 comment: 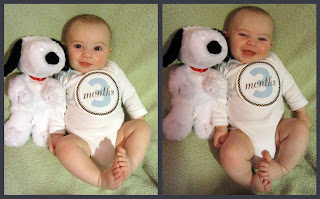 Wow, today Noah is 3 months old! I can't believe 3 months have gone by already. At the same time, it is crazy that it is ONLY 3 months when we take stock of all the things he has learned to do and how much he has grown. We put on his "coming home outfit" today and it was too small! When we first put it on him it was WAY too big. 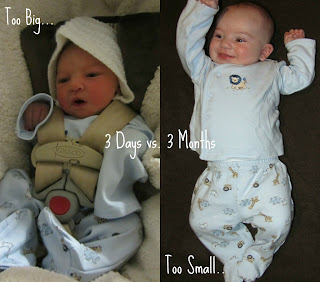 Just in the last few weeks Noah is "talking" up a storm, laughing at things his silly Daddy does and recognizing faces and things. He also is actively reaching out to grab toys, mostly the rings that hand down from his activity mat. He has gotten so strong that he can bed the bar of the mat by pulling on the rings to get them down to stuff them in his mouth!

Speaking of his mouth, it seems that nothing is safe from his mouth and the drool that comes with it. He blows bubbles like a champ, you would think he had soap in his mouth but no it's just spit. It is too early for teething but he seems to LOVE sucking and chewing on everything in sight. He loves his Sophie, the ubiquitous squeaky giraffe from France that all babies love. But even with lots of toys, he prefers to suck on fingers (his own and his Dad's), Mommy's face and a really gross burp cloth. Go figure.

He is becoming very mobile, mostly in the backwards direction. he can shove off with his legs and launch from one side of his mat to the other. We have also found him scooted all the way to the top of his crib in the morning. Sometimes on his mat he will scoot in a circle, like a break dancer. We are still waiting for him to roll over but it seems very close. He can get to his side from both his tummy and his back but he hasn't made it over all the way yet.

With the weather getting really nice, Noah has made it outside more and more. He likes the breeze and loves to look around at his surroundings.  He has gone on lots of adventures with his Daddy now that his Mommy is back at work. He has been really good with taking the bottle but we will see what happens when we bring him to daycare at the end of the month. I am sure he will make a lot of new friends but it is going to be really tough at first. I hope he likes it and cries less than I am sure I will.

Posted by Shannon at 9:10 PM No comments:

The Best Sound in the Whole World

I'll work on a real update this week as Noah turns 3 months but until then, here is a video of my new favorite sound- Noah's laugh!